If you are thinking about buying a portable gas grill for use on the beach or for a countryside picnic there are lots of different types and brands or portable gas grill to choose from. However, two of the most popular of these grills have been around for many years. They are “classics” that have proved themselves in action at lots of outdoor party events where a barbecue grill is an essential piece of equipment.

These portable gas grills are:

On the face of it these two grills don’t look so very different, and so which one do you choose? Is one of them significantly different from the other?

Although no comparison that doesn’t set out to run these two grills head to head is going to be perfect, this article will hopefully help you choose the most suitable grill for your barbecue parties.

Whenever you set out to select a new barbecue grill there are at least three important factors to consider:

– Overall Construction – How well it’s made and the materials used

– Operation – How well it works in action

– Maintenance – How easy it is to clean and maintain

I’ll now compare the Weber Go Anywhere Gas Grill and the Char-Broil Tabletop Gas Grill under each of these headings.

Both grills are made from coated stainless steel to prevent the formation of rust. The Weber Go Anywhere grill weighs 15 lb. against the 10 lb. of the Broil-King grill, which suggests that Weber may have used slightly superior materials in manufacture.

However, the Weber grill is taller (14 ins.) than the Broil-King (10 ins.). This height difference is obviously going to contribute to a difference in weight. Both grills have folding legs which lock over the lid for travelling.

The fact that the Weber grill is a lot taller may also explain why some Char-Broil customers found the Tabletop Grill a little difficult to work with in extremely windy conditions, whereas this doesn’t seem to be a problem for customers of the Weber Go Anywhere grill. But I am only guessing here.

Both grills have handles on each side so that they can be carried easily, but the larger insulated handles of the Weber will undoubtedly make it easier to move the grill around when it’s hot (into a more sheltered spot perhaps!).

The cooking grates on each grill are different in size. The Char-Broil grate is larger (187 sq. ins.) than the Weber one (160 sq. in.). Although this difference in size isn’t large it may be important if you have more than four people in your barbecue party.

There isn’t much difference in the BTU ratings of the two grills. The Weber grill operates at around 10,000 BTU’s and the Char-Broil grill around 12,000 BTU’s. In theory this means that it should be quicker to grill food on the Char-Broil than on the Weber.

Reviews by Amazon customers using both of these grills expressed overall satisfaction with how both grills worked, but a few grumbled about the length of time it took to cook food (on both grills!) This is really what you would expect from a grill that has only 10,000 BTU’s compared to the 20,000 to 30,000 BTU’s of a smallish home gas BBQ grill.

Both grills are cleaned in the same way, by scraping ash and food waste from under the burners after the BBQ is finished. Neither grill has a “catch tray” underneath the burners. Many customers use aluminum foil in the bottom of their grills to make cleaning easier.

Because both Weber and Char-Broil are established names it’s possible to buy spare parts and accessories for both of these portable grills. Many other inexpensive grills on sale are foreign imports and spare parts services are not available.

The Weber grill is almost twice as expensive as the Char-Broil Grill, so perhaps it’s a little surprising to discover that on the Amazon “Best Sellers” List the Weber currently stands at No. 9 and the Char-Broil at No. 56 (but bear in mind that these ratings are dynamic and can change dramatically during the course of a year).

The levels of customer satisfaction for these grills are similar, but in line with the numbers of each grill sold, the Weber currently has 320 customer reviews and the Char-Broil 32.

As we have seen the Weber Go Anywhere Gas Grill is the more popular of the two grills, but it’s almost twice as expensive. In terms of specification there’s not a lot to choose between them, but you might perhaps assume that the Weber Grill will last longer. This is quite a reasonable assumption, but if you read the Amazon customer reviews you’ll find Char-Broil customers that are still using their grills after 5 years.(Many people throw cheap grills away after 3 years because they have rusted and fall apart).

The Char-Broil Tabletop Gas Grill is slightly more compact and perhaps packs a bit more of a punch (i.e. higher heat rating), but overall there’s not much to choose between them. With barbecue grills as with many other products, brand preference may guide your choice rather than other factors.

Read full reviews (with videos) on the Weber Go Anywhere Gas Grill and the Broil-King Tabletop Gas Grill. And for lots more comprehensive reviews on the web’s best-selling gas, charcoal and electric BBQ grills and to sign up to receive regular email “Barbecue Secrets and Tips” go to Barbecues for Sale. 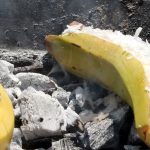 Need something sweet but flashy to put an exclamation oint on your next cook out over coals?  Try this Banana recipe that is super simple and fun.

We tested it out on the GrateTV BBQ and Grill show and can attest to the tasty results.

Take a look as Pit Master Jack Waiboer and Bill West match up banana against ripe plantain to see which one grills tastiest when split and roasted on live coals with your choice of candy bar mix ins.   Spoiler alert:  we LOVED banana and Almond Joy with a dollop of vanilla ice cream.

Check out the full banana recipe here and watch us in action HERE. 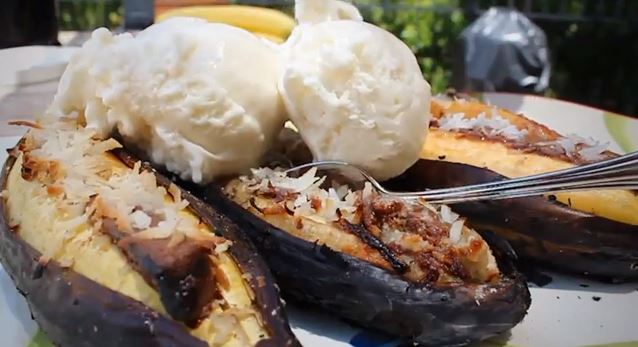 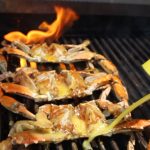 http://GrateTV tackles South Carolina Blue Crab on the grill and we step things up with a sweet and tasty Krispy Kreme bun to carry your crab salad.

Head to http://GrateTV.com for the full crab recipe!