Shopping for new BBQ gear?  Here are a few “Tool hacks” that you can use

CLICK FOR VIDEO There’s something about a rotisserie chicken.

They’re everywhere these days in supermarkets – slow roasting by the dozen on display in industrial cookers the size of your guest bedroom. But the truth is if you have a rotisserie kit (it may have come with that fancy new grill and is now in a box in the attic somewhere) it’s actually pretty easy.

Every attempt we made with our gas powered Sam’s Club spit and electric motor set up ended with incredibly succulent and golden brown bird.

There’s only about four ingredients.

Here’s an updated video overview using turkey: http://youtu.be/xqB5mLKevxI First start with a clean bird – Chicken and small Turkey seem to work equally as well. Rub lightly (watch for too much salt) with BBQ Tricks house seasoning UNDER the skin and over the entire outer surface of the skin. Rub seasoning generously inside the cavity of the bird (remove any “spare parts.” Let the bird rest (upright if possible) uncovered in the refrigerator for about four hours to allow the seasoning to take and also to dry the skin a bit (this helps to crisp the skin later). My hunch is you could bypass all the above and still have an incredible meal but the little things do make a difference. 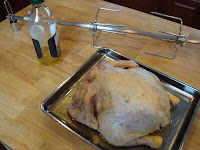 Remove the bird and let it come to room temperature about an hour before you plan to cook. two or three hours before you plan to serve. Before you put the chicken or turkey on the spit mark the location of the grill’s burner with two marks (with a Sharpie Permanent Marker) so you’ll always know exactly where to slide the meat in the future. The most important thing to accomplish is to balance and secure the bird firmly on the rotisserie prongs so that the entire mechanism rotates smoothly on the spit. Use trussing to help if needed. Test it by rolling the spit ends on a flat surface or even on your hands. After you have it on a hot grill it’s very difficult to adjust. Also use pliers to secure thumb screws. You don’t want an end to slide.

Finally make sure the spit is secure in the motor mechanism. Confirm there is no way for it to slide out (does it sound like it happened to me?)! After you start the spin and cook come back and sight check everything after five minutes. Let it Cook til golden brown checking infrequently for one to two hours. Our 4.72 lbs chicken took just over two hours.

When golden check the temperature with a good thermometer and remove to a cutting board to rest. BBQ Tricks House Seasoning 2 Tablespoons Kosher Salt 1/2 Tablespoon Fresh Ground Black Pepper (grinding is a little bit more work but worth it) 1/2 Tablespoon Garlic Powder add Paprika for color

Planning an oyster roast? If you need to remember the peak months for oysters and oyster roasts just keep this in mind…

It used to be said that you shouldn’t consume oysters in months without the letter R but due to commercial harvesting and modern refrigeration and other factors it’s just not as big an issue these days unless you’re actually harvesting yourself. Still it’s good to remember that the summer months – that is for most of us watching this episode – are the spawning months for oysters & the meat just isn’t as good – due to how they reproduce the flesh ends up with the a thinner milky texture.

Off season oysters will probably not be as readily available as they will be just due to traditional seasons and when you do find them the price won’t be as good as the R months but don’t be afraid if you see it on a menu in a nice restaurant.

Easy to remember–the Pirates favorite letter is “R” or AAAAhhhhhhrrrrrrrrRRRRR.     Peak months for oysters are September to April when they’re at their best —but for that reason traditional oyster roast are always in colder months they contain the letter “R”– September, October, November, December, January, February, March, April.

Oyster – roast -( the word roast starts with the letter R by the way) the Pirates favorite letter something to remember. for more tips tricks other fun stuff head on over to www.barbecuetricks.com