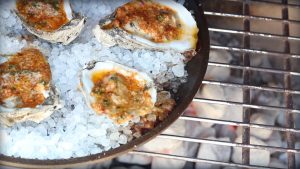 An oyster roast is a special thing.

But what exactly is an oyster roast? It’s different from fire roasting oysters.

In coastal America friends gather during the “R” months and shake off a bit of a winter chill over a steaming hot table of oysters.
Nothing fancy.  It’s just oysters (sometimes a bit of grit and mud if you’re really authentic) some hot sauce, saltines, and cocktail sauce.

Roasting is usually fire, meat and char, right?  You can add the “roasting” back into the cook by preparing your oysters on the half shell first and then add a dollop of specially prepared savory compound butter (recipe below). Shell your oysters being careful to retain as much “liquor” as possible. Loosen the meat and keep in the half shell.

Keep your oysters stable by nestling them on a bed of rock salt (ice cream salt was most readily available) in a large cast iron skillet.  You can try to rest the shells directly on the grate but it may be a balancing act with unevenly shaped shells. 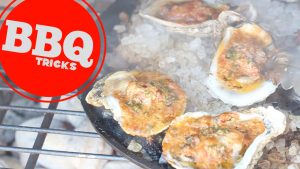 Using fresh oysters on the half shell (shuck them by inserting the tip of the oyster knife into the joint end of the shell fish and twisting the blade.  Try to keep as much of the briney liquid (also called liquor) in the bottom shell with the loosened oyster meat. Top with a dollop of compound butter and heat shell side down over live fire or coals until edges brown and liquid bubbles.

Mix butter and ingredients other than the oysters in a bowl.  Top each oyster with a tablespoon of butter mixture.  Heat over live flame utilizing coarse salt in a cast iron pan to stabilize. Once sizzling hot top with additional parsley for garnish.