From http://GrateTV.com Jack Waiboer and Bill West answer a question about the fat side of a roast plus a shot of secret ingredient. June 2010 Also featured:http://BBQaddicts.com 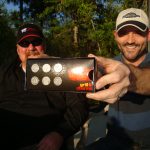 Jack Waiboer and West get Charming

Jack Waiboer and I cobble together another collection of randomness about barbecue and grilling stuff. Make sure you subscribe to the iPod feed or mailinglist. The Weekly video Podast fetures scoop on setting up your BBQ Toolbox, Grill Charms and a Secret Ingredient that mackes you pucker.

From http://MeatheadsTV.com Episode 004 with Jack Waiboer and Bill West discussing barbecue questions about how to prepare for a first barbecue competition and fishy secret ingredient and a Beer Can Chicken gadget.

We’ve teamed up with the best cooker we know… three time SC State Champion Jack Waiboer to get together an BS about barbecue, beer, meat and cookin’ once a week.   Jack’s also the founder of Carolina Pitmaster’s Cooking School.  Hopefully it’s fun for BBQ fans and you can learn a bit from the beer we share together.

Episodes will post Wednesdays and we’re always up for show suggestions and questions.  But hey – it’s our first time… be gentle!    Post them here as comments and make sure you FAN us on Facebook and subscribe via iTunes.

Here’s quick sample… head to MeatheadsTV.com or iTunes for more!