What You Need to Know About Using BBQ Marinades 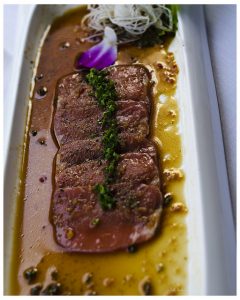 Take your barbecue and grilling skills to a new level by learning how to make marinades for the food you cook on your bbq grill. By using your own bbq marinades you can not only produce lots of exciting and different food flavors, but also ensure that your barbecued food is more pleasant and healthy to eat.

What is a Marinade?

Marinating is a process used before barbecuing or grilling to impart flavor and also, especially for meat dishes, to tenderize. The marinating process is carried out by soaking your fish or meat in mixtures of different ingredients (the marinade) before cooking, sometimes for just a few minutes and sometimes for many hours or even overnight. You can use marinades for any food you cook, but they really come into their own when used on the food cooked on your barbecue grill.

This article will introduce you to the different types of marinade you can use and outline the steps you should follow for successful marinating. It will also point out some of the mistakes commonly made when making and using bbq marinades.

Use a Marinade for Flavoring

There are thousands of different marinade recipes which can be used to flavor foods cooked on a bbq – meat, fish and vegetables. The intensity of the flavor produced depends upon the ingredients of the marinade and the length of time used for marinating.

For example, if you are going to cook shrimp on your bbq you might choose a lime marinade. The lime flavor to enhance the flavor of the shrimp when it’s cooked. As we’ll find out later though shrimp should only be marinated for about half an hour. If you do it for longer the strong flavor of the lime will dominate that of the shrimp and spoil your dish.

However, the same thing doesn’t apply to all fish dishes. Tuna has a strong flavor so you might choose a recipe which recommends marinating for several hours. As a general rule, stronger flavored and less delicate fish can be marinated for longer, but the length of time used will depend upon the ingredients in your marinade.

If you are working on a jerk beef marinade recipe with all manner of spices and sauces you’ll want your bbq beef to be tender and have an intense flavor. In this case you would marinade for at least eight hours. The longer period of marinating affects both the flavor and the tenderness of the meat once it is cooked.

Using Your Marinade for Tenderizing

Acidic marinades contain vinegar, cider, lemon juice, or wine as ingredients. These ingredients act on the coiled protein substances within meat (or fish), breaking them up by causing them to unwind. The process of unwinding softens them.

It may seem rather strange to use acidic marinades for fish, but they can produce the most wonderful flavors. The key is to use the correct strength acid for the type of fish you’re marinating. The shrimp marinade described above should be a low-acid marinade (perhaps one part mild acid to four parts oil) to avoid making the shrimp tough.

A fairly tight-textured cut of meat like flank steak can survive a more acidic marinade because the marinade only penetrates the meat by a fraction of an inch and therefore won’t toughen it.

The enzymatic marinades need to be used carefully because they can work almost too well. They will, for example, turn tough meat muscle into mush if it’s left in the marinade too long. In some cases the meat won’t even pass through any intermediate stage of tenderness.

Make sure you use a proven recipe when preparing marinades for your bbq. As a general guide marinate fish for short periods of time (anything from 30 minutes to 2/3 hours depending upon the texture of the flesh) and meat for much longer periods (8 to 24 hours).

Find a good marinade recipe and prepare your marinade. Make a careful note of the recommended times for marinating.

Use a large porcelain vessel (with a lid) to marinade your fish or meat. You’ll need just enough marinade to cover your food. If you have an excess of marinade, you can save it in a sealed container in the fridge for use on another occasion.

When you have covered your food in the marinade put the vessel in the fridge. The lower temperature will inhibit the growth of bacteria in your raw fish or meat and prevent oxidation of the marinade ingredients.

When your bbq has reached the required temperature remove the food from your marinade and put it on the hot grill. During cooking don’t baste your meat with the raw marinade, and don’t use the marinade left over in your basting vessel to prepare any sauces unless you intend to boil them first to destroy the bacteria.

The flavoring ingredients in a marinade can include a wide range of juices, oils, herbs, and spices. Marinating is used for barbecuing and grilling all over the world for many different types of national cuisine. For example, the marinades used for Indian cuisine contain lots of spices such as, cinnamon, cardamom, cloves, paprika.

Once you start preparing marinades for your bbq you should start investigating the many global internet sites where you can find marinade recipes. Make a folder for these recipes as you discover them, but I recommend that first of all you should start with the well-established recipes, later moving on to recipes which might not be so well-known, but can be great fun to experiment with.

Find out more about bbq methods and techniques and catch up with my reviews on the most popular and best-selling bbq grills at www.barbecues-for-sale.com.

And while you’re there don’t forget to sign up for our FREE “Barbecue Secrets and Tips” Newsletter.