We’ve seen the “Bone Sucking” sauce out a lot and it looks like a great product. They must be doing something right as their line is now expanding with a bit of South Carolina mustard style. This is the press release BBQ Tricks received just yesterday…

Seasoning & Rub Gets Spicy while the Mustard Takes a Sweet Turn
ABOUT FORD’S GOURMET FOODS
Ford’s Gourmet Foods creates some of the world’s greatest tasting all-natural, gluten free foods including Wine Nuts and Fire Dancer Jalapeño Peanuts, Earth Family Organics and Naturals, and the internationally acclaimed Bone Suckin’ Sauces – the ONLY barbecue sauces rated #1 by Newsweek, Food & Wine and many others. A fourth generation, Raleigh, NC-based family business, Ford’s is known to make only the best.
For more information, visit us in Booth 5500, Calling us 919-833-7647 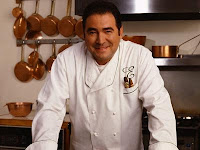 Emeril just wrapped up a big contest/feature on “Good Morning America” where he named the “Best Potato Salad Ever.”
The recipe they chose broke from tradition for us at Barbecue Tricks. We’re not used to much bacon in the mix. But when it’s there most BBQ lovers DO like the flavor.
Here’s the recipe followed by the runner up with a bit more tradtional and creamy salad. The third runner up was different too… she oven roasted the potatoes… neat idea.
Ingredients:
8 large red potatoes
6 hard boiled eggs, chopped
1 lb. bacon
1 large white onion, chopped
2 c. mayonnaise
1 c. sour cream
3 tbsp. milk
2 ½ c. shredded lettuce
2 large tomatoes, chopped
2 c. Shredded cheddar cheese
1. Wash and boil potatoes until tender. Let cool.
2. Chop and cook bacon and onion together, until bacon is crispy. Drain grease into a bowl and reserve.
3. In a small bowl mix mayonnaise, sour cream, bacon drippings and milk. In a large bowl, combine potato, eggs, and the onion-bacon mixture. Add mayo mixture to potato mixture and toss. Cover with plastic wrap and refrigerate for 2-3 hours.
4. Served topped with lettuce, tomatoes, and cheese.

It’s great to get to know new fans of barbecue and all types of food. Blogging seems to be a great way! Hello to my new friends joining in from the Great Cooks BlogRoll and SimpleDailyRecipes.com. Recipes look pretty budget friendly! Explore their sites and you’re sure to find some good eats. 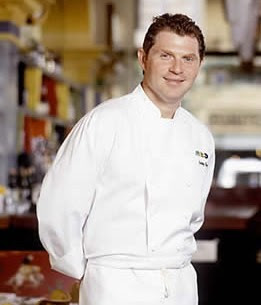 Are you a Master Griller? Are all barbeques held at your house? If you’re a serious griller (charcoal or gas) and have the skills to prove it, then live out your culinary fantasy on Bobby Flay’s new half hour GRILL IT! series on the Food Network.
To apply, please create a 3-minute VHS Tape or DVD in which you cook us your favorite dish. Tell us how you created the recipe and the ingredients you use.
All applicants must have a terrific personality and must illustrate
why you’d make a fantastic candidate for GRILL IT! with Bobby Flay! Unlike “Throwdown with Bobby Flay” there’s no winners or losers, instead GRILL IT! shows people how to grill with a well-stocked kitchen.
All applicants must live in the U.S and be 18 and over (although quick-witted teenagers with parents’ permission can apply).
To be considered, please mail your submission tape, original recipe and photo of yourself to the address below no later than March 15th.
ATT: GRILL IT!110 Leroy StreetNew York City, NY 10014
Questions? Email grillitwithbobby@gmail.com