Click to Play
From http://GrateTV.com a BBQ Competition judging process broken down with Q and A. ;Here’s a behind the scenes look at what Master barbecue judges think when they judge a box set for competition. 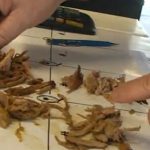 Click to Play
From http://GrateTV.com a Look at Judging BBQ competitions.   Is cooking or competing your niche. Some prefer to take part in competitions as an official judge.  Sanctioned contests may be in your future.

Click to Play
From http://GrateTV.com Jack and West talk judging competitions and take a look at this week’s secret ingredient. ;A viewer sends in a Grate Plate photo. 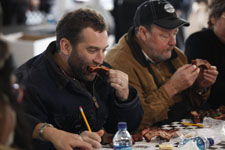 The annual BBQ cook off came to town this past weekend and I decided to take a new angle at it.  Each year I had been scraping together a team and spending upwards of four hundred bucks to compete for bragging rights and the hope to make a bit of the cash back (some guys do… I haven’t yet).   There is definately some to that “thrill of the grill” but I wanted to try something different.

This year I signed up as a judge for the self sanctioned competition.     First off… some of the big BBQ sanctioning groups (KCBS and Memphis In May) have training classes you need to take so you may not be able to jump directly in but it’s not difficult.    My event was self sanctioned (they made up their own rules) and the group enlisted judges from other organizations.   This is not uncommon and, in general, the attitudes around the judging tents seems to be fairly loose, laid back and ready to teach newbies.  Don’t be surprised if it seems a bit chaotic.

I learned that being a judge was, for me, better than competing.

Judging bbq competitions may be right for you too if  you are:

The last point is a good one.  You get a whole new perspective on how serious (yes one cooker missed his turn in time and his chicken was eliminated) and sometime subjective judging can be.

BBQ Tricks and Tips I took away:

Overall I was surprised how similar all the ribs were and how everything was still warm.  Judging was an econmical way to experience the thrill of the grill without touching any charcoal and still getting a good night’s sleep.