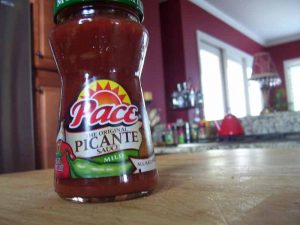 Most people host a Super Bowl Party, we host a Super Bowl Barbecue. If you’re looking for a sure-fire way to spice up your party or next barbecue, serve these crowd-pleasing, lip-smacking dips! The common ingredient is zesty Pace Picante sauce. Pace  provided it at no charge and asked us to share our favorite dishes using their product. Here are the two dips we chose, but rest assured there are many uses for Pace Picante sauce when planning to barbecue!

Melt butter. Add beans and cook over low heat mashing and stirring until smooth. Stir in remaining ingredients and cook until cheese melts, stirring often. Keep on low heat until ready to serve. Cut flour tortillas into wedges and microwave in wax paper. Serve dip while hot and bubbly with warm tortillas and tortilla chips.

For a heartier dish, try this next one with either tortilla chips or battered chicken fingers.

Mix all ingredients until well blended and pour into a small baking dish. Bake at 350 degrees for 20 – 30 minutes until bubbly. Serve hot with fried chicken fingers and tortilla chips.

These taste-tempting dishes are sure to please your most discerning palettes, and just remember Barbecue Tricks when you’re looking for some delicious recipes and tips!

Tortillia chips can be easy to make at home.  The recipe is as easy as three ingredients. Click through the video for the easy step by step.

The best things about these home made chips is the buttery taste and the sturdy firmness of the chip.  In fact, you’ll have a hard time finding a chip that can stand up to guacamole and spicy bean dip any better than these.

Add some salt right after frying and serve ’em hot.

Click to Play
From http://GrateTV.com Hosts Jack Waiboer and Bill West look at a unique smoker pouch for the kitchen or grill. Plus an I tried that segment and we go cuckoocoo for this weeks secret ingredient. ;01/26/11 Hug your Mama.
Tags: bbq, barbecue, barbeque, adam perry lang, billwest, jack waiboer, grill 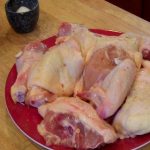 Are you in the mood for trying something different on your grill? Want something that is fun to cook, delicious to eat and that will impress you, your family and your friends? Well then, do we have something for you. Don’t look now, but straight from the islands it’s Huli Huli Chicken coming your way!

“Huli” is the Hawaiian word for “turn.” Ernest Morgado “invented” Huli Huli chicken in 1955 when barbecuing a batch of chicken for some farmers using his mother’s marinade recipe. It became such a hit that he registered the trademark with the Territory of Hawaii in 1958 and with the US Government in 1965. Morgado cooked the chicken between two grills and when one side was done someone would shout “Huli” and the grills would be flipped over.

The dish has become legend in Hawaii where it is often sold at charity fundraisers. It has also launched many commercial sauce brands and has even inspired a song called Huli Huli Chicken by the group The Barefoot Natives.

Fortunately, you don’t need to use two grills do you your own backyard version of this great tasting dish (although we highly recommend shouting “huli huli” when you turn the chicken). Instead, a charcoal burning barbecue will work quite nicely – we use a Big Green Egg, for example. You will need to get some mesquite chips, if you don’t already have some, and then the ingredients for the following recipe:

One cut up chicken

Mix up the ingredients and use about half to marinate the chicken for at least an hour. Reserve the remainder to baste the chicken when it is on the grill. Meanwhile, soak the mesquite chips in water for about 20 minutes. Heat your barbecue to the 300 to 350 degree range, apply your pre-soaked mesquite chips and proceed to turn and baste the chicken every 5 minutes until it is done – about one hour. Oh, and don’t forget to shout “huli huli” when you turn the chicken!

Once you taste Huli Huli Chicken, you will understand what the fuss is about. The chicken is tender, succulent and flavorful without being overpowering. When we have it, the chicken is eaten clean down to the bone. It really is that good! It also lends itself well to entertaining – for example you can use it as a centerpiece for your own Luau. Don’t feel like entertaining? Then use it to give yourself or your family a night of fantasy and fun. Dial up some Don Ho on your iPod, put on that DVD of Elvis in Blue Hawaii, mix up a Mai Tai or other such suitable libation and voila, you have a made-to-order Hawaiian vacation without the expense or hassle of the travel!

Gary and Maria Nicolassi are a husband and wife writing team that author two blogs: