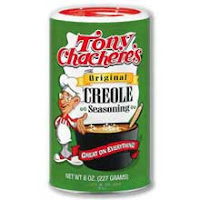 If you’re looking for a quick and easy all purpose rub this is it. It’s simple… and once you make it you’ll want to keep it on hand to sprinkle on everything from chicken to ribs. I even like the sweet heat on popcorn! It qualifies as a trick because of the super simple secret ingredient: Tony Chachere’s seasoning available in most grocery stores.
Barbecue Tricks “Anytime” Rub

Mix thoughouly with fork and store any remaining rub in and airtight container or jar for up to one month. 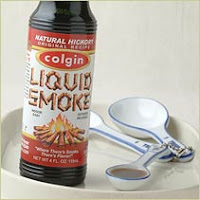 Sometimes the simple things can make an ordinary recipe a “secret” recipe. I’ve discovered one “trick” that adds a special kick to all sorts of sauces and marinades. Liquid Smoke. It is hard to believe they can bottle the stuff… but it’s simply condensed smoke. Made almost like moon shine condensed from the smoke of all sorts of hardwoods but mainly hickory and mesquite. It’s filtered and then sold somewhere between the ketchup and hot sauce.

Many a pit master will swear they can taste liquid smoke loud and clear and think it’s a complete rule breaker. In my book it can serve you well as a time saver (try it in the crock pot with a brisket or butt – not the same as the real thing… but works for some) or as a secret ingredient.

My favorite use for liquid smoke is in a steak marinade. If you love “Dale’s” or “Moore’s” liquid marinade you’ll probably love this “not so secret” marinade that I first used for flank steak in fajitas and later found it great for London broil too. Add a dash of liquid smoke to your favorite light soy sauce (regular soy becomes too salty for thinner cuts like flank or skirt). A few sliced onions add additional flavor to the marinade.
NOT SO SECRET STEAK MARINADE:
one – 15 oz. bottle of light soy sauce
one – half teaspoon hickory liquid smoke
one sliced whole onion 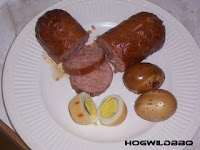 Gotta hand it to the Hogwild Barbecue Blog…

They came up with a cool idea for smoking an egg.

They smoked it extra low – about 160 degrees for about an hour.And even that they say may be a bit over done. The smoke really DOES penetrate the shell too.They say if you like hardboiled eggs you’re sure to dig this trick. Imagine THAT kicking up your deviled eggs!

Sittin’ On Your Beer Chicken… Funny name. Great Flavor.
No one here at Barbecue Tricks pretends to have created this crazy dish. It’s a technique that’s become very popular these days and there’s good reason. Once you’ve slow smoked a chicken with a can of beer in it’s butt you’re guaranteed to have some moist succulent chicken. It’s also cheap and easy. 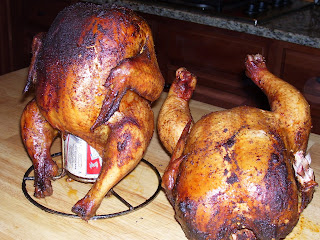 Here’s How:
Start with a fresh whole chicken. Rinse thoroughly. Pat dry with paper towels. Grab two beers out of your refrigerator. Open. Pour half of beer number one in a cup and reserve.
Prepare the bird (You may want to say “This may hurt a bit”… or “brace yourself little buddy” but that’s not what we mean). Sprinkle the inside cavity with a good dose of salt and pepper or your favorite spice rub. You can now work your way under the skin of the bird and rub some additional spice rub UNDER THE SKIN to penetrate directly into the meat.
Keeping the beer can upright insert the can of beer into the chicken. In other words lower the chicken onto the can. You should be able to stand the bird upright on the can using the drumsticks to act as support. Beer can chicken has become so popular that you can even find can holders made specifically for grilling. Next brush or rub down the entire exterior of the chicken with a light coating of vegetable oil (Or spray down with some PAM cooking spray) and rub down with an additional tablespoon of barbecue rub. Go ahead and have some of the reserved beer… you’re almost done.
Place the entire contraption on an aluminum pie pan (or a good drip pan) on top of the grill .Prepare your grill to cook on indirect medium heat for about 90 minutes or until a meat thermometer reads 180 degrees. Where did that other beer go?Let the chicken rest for five minutes and then CAREFULLY remove the can of HOT beer from it’s rear.
Ingredients:
3 tbsp. BBQ Rub (or equal parts salt pepper and paprika)
1 Whole (4lbs.) Chicken
Cooking oil spray
2 cans of Beer (12 oz.) 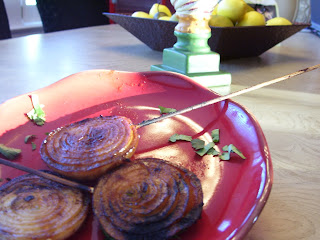 Here’s a great side that’s guaranteed to entertain at your next cook out and it’s a BBQ Tricks original.
This is a great way to grill onions without worrying about losing the veggies between the grates. Simply skewer the onions and create what looks like an onion lollipop. It’s fun to serve, helps the cook, and taste great. The trick is to skewer the whole onion (kinda like a mohawk porcupine) BEFORE slicing. Soak the skewers first to keep them from burning on the grill. Space the skewers so that you’ll have a little less than one half an inch between the sticks. You’ll want thick slices to hold up to the heat. 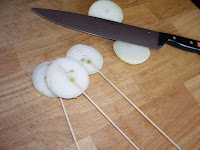 Carefully slice the onion into pops by using the sticks as guides. Next marinate the raw pops with a combination of lite soy sauce and liquid smoke (or choose you favorite liquid marinade or bbq trick rub. When the grill is hot (medium to high heat) brush each pop on both sides liberally with oil and set them on the grate for about four minutes each side (rotate 90 degrees after three minutes for show-off grill marks). One final brush of oil and CAREFULLY remove with spatula and plate immediately (pops are fairly soft when cooked). For best results find the fattest sweet onions (Vidalias) available. 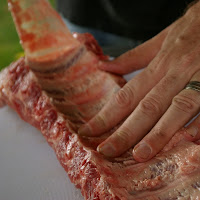 BBQ aficiandos will argue if you really NEED to remove the membrane on the backside of a good slab of ribs.
I say it’s a nice thing to do if only to make it easier to pull apart and eat each individual rib. Some like a bit of a chew. The additional benefit is that it allows for a deeper penetration of your favorite rub or marinade.
The simple trick to removing the membrane is to use a clean paper towel to grip the slippery tissue. I haven’t met a cook that has a grip tight enough to grasp the membrane firmly enough to pull it off the slab! Simply use a butter knife to begin the peel on one end. Then grasp what you can of the tissue (the membrane is on the boney side of the rib). If you’re lucky you should be able to peel off a nice clean sheet.
It often times takes a few peels to get it all. If you can’t get every fragment – don’t sweat it. You’re guest will likely not notice smaller amounts remaining.

A PECAN crust on your BabyBacks? Everyone at BBQ Tricks.com is ready to try this neat use for Pecans.Inspired by a Dominican Republic drink known as Mamajuana (also described as Dominican Viagra!), these ribs go through a two-stage cooking process.
First a slow braise to tenderize the ribs, then grilling and basting for the char flavor and crispy goodness.
GET THE TRICK HERE 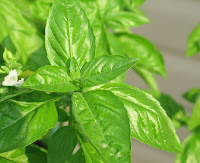 Don’t limit your babecue to just smoking with hickory and mesquite. Try Basil Twigs. If you happen to grow fresh basil during the summer months you’ll likely find that you have an dry bush of twigs as winter nears. Not good looking… but good for cooking!
Use the completely dried twigs to add flavor to your next cook out. Soak the twigs as you would any wood chips and use them to add that secret basil flavor to pork chops or a good London broil. Enjoy a cold one while your buddies argue over what wood your using!