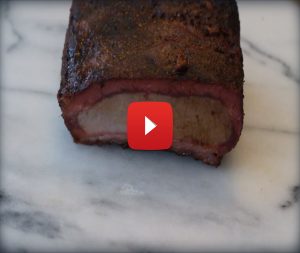 A good smoke ring is a pit master’s point of pride.   A beautiful deep rustic red outer layer of the meat that is so tantalizing it’s considered a badge of honor.Here, red meat does not mean rare or under cooked it means roasted low and slow and smoked to perfection.

So how you really get a good smoke ring? Here are a few quick tricks to perfect your smoke ring – win friends, influence people and delight cookout guests.

A good smoke ring is actually formed as a chemical reaction with nitrogen and chemicals in wood smoke reacting to the surface of the meat. I’m not convinced the actual creation of a ring tastes any different… But it’s coveted and looks great.

Here’s How you Can Make The Smoke Ring:

I said earlier you don’t necessarily taste the smoke ring but if you really want to there are ways to kind of cheat the ring without a lot of smoke.

Try Morton’s Tenderquick. It’s a curing salt with nitrites and nitrates that you can use before cooking (warning: in a rub – a little goes a long way. You can also dust on for an hour and rinse off before cooking). The “whole food” foodies probably wont like it but it forces the chemical reaction on the surface of the meat. It’s one secret ingredient for getting a smoke ring.

There’s also a thing called Fab and/or Pink Salt that is also out there. You can even take a more natural route by using celery. Celery salt, celery juice, and celery seed in your rubs will add more naturally occurring nitrates.

Just a few tricks will showcase the ring…. My precious… If u have tricks share in comments and send along a bbq plate pic #grateplate – Head over to www.barbecuetricks.com