Barbecuing is not what it used to be. When growing up the only time that my family would start up the grill or smoker was in the summer and on the weekends. Today, people barbecue every night and all year round. Barbecue sauces have come along way since then as well. There used to be only a couple of choices at your local market. But now with the invention of “super” markets the amount barbecue sauces you can buy locally has grown significantly. For those gourmet barbecue sauces the web is probably the only place you will find these unique sauces. If you don’t live in the Alabama area the only place you will find traditional White BBQ Sauce like Big Bob Gibson’s is on the web or of course you can try to make it yourself.

In Alabama Barbecue traditional Sauce uses Mayonnaise as its base rather than tomato sauce, vinegar, or any of the other more typical barbecue sauce bases. It is clearly a region favorite. Bob Gibson of Decatur, Alabama is credited with the invention the white sauce back in 1925. Friends and family were first treated to this secret-recipe sauce on chicken and pork at weekend barbecues where boards were nailed to trees for tables. Today, this famous mayonnaise-based condiment is traditionally employed to baste chicken, seafood and pork.

White BBQ Sauce is as synonymous with the state with Alabama as the legendary “BAMA” football program. White BBQ Sauce’s intriguing flavor complements salads and is a superb baste for chicken, pork and turkey. You can also use White Sauce as an ingredient to add an extra kick to your favorite slaw or potato salad. However, because the racks of your local grocer are dominated by many incarnations of tomato-based sauces and white bbq sauce is such a regional anomaly, most people outside Alabama have not tested this concoction of flavor.

Like many barbecue sauces you want to apply this only at the very end of your grilling or smoking. It will breakdown and separate if it is heated too long. Use this sauce on chicken and turkey. It is also good on pork. Alabama White Barbecue Sauce has a tangy flavor that is a great addition to grilled foods.

White BBQ Sauce makes a unique experience. Use this recipe when grilling chicken; brush lightly over the chicken during the last few minutes of grilling. This sauce is also great for dipping; keep some sauce aside for passing at the table.

Place all ingredients in a very large blender or food processor. Blend for 1 minute, or until thoroughly mixed and sauce is smooth. Pour sauce into a large container or bowl.

Chris McCarthy is the owner of InsaneChicken’s BBQ Sauce Catalog. InsaneChicken is proud to sell Big Bob Gibson White BBQ Sauce and a BBQ Sauce of the month club [http://www.insanechicken.com/bbq_sauce_of_the_month_club.html]

Crispy skin on BBQ chicken can be a  tricky thing.   The slow roasted fat-rendering is just not something our fast paced world takes care to do.  Plus if you’re attempting to slowly smoke poultry a lot of times you can end up with a rubbery skin. Some competition guys will remove, chill and shave the skins for chicken thighs… that’s a lot of work.  Here’s a different method. I think it retains more fatty flavor too. 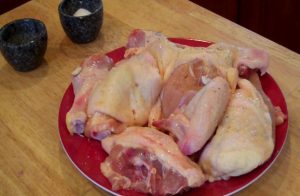 It’s a trick to control the barbecue chicken.   It’s easy but takes a bit of time.   Four hours prep time to be exact.

The secret is in salting the pieces (you can spice the salt a bit see recipe below).
I call it a dry brine.  Rub your spice blend into the meat UNDER the skin and lightly on the skin surface on all sides.  Thenplace the pieces on a pan uncovered in the refrigerator to dry fro four hours.  You can experiment with the time if you want but it has worked repeatedly for me with different sized pieces.
After four hours remove and if ther is any moisture on the pieces of chicken blot with towel (I did not see any when I did the video).
I used a water pan smoker (Brinkmann Gourmet Charcoal) and cooked low (about 270 degrees) for about an hour with pecan wood smoke (wood chips).   The result was a golden brown crispy skin that is tought to find without a rotisserie.

Internal temp was over 160 so after a quick slather of a sweet sauce I lowered the grate (use the bottom of the smoker without the middle piece or fire up your grill to HIGH) and seared the pieces over a direct high heat.    Pay attention here this process is quick and flame ups happen quickly.
Be prepared to remove from the grill at any point.
The result was a crispy – bite through – succulent batch of bbq chicken.   See the result in the video and “thumb it up” and subscribe if you like.

Mix 2 tsp salt and 2 tsp garlic powder together and spread on outside of each piece of chicken as well as underneath the skin. Place in the refrigerator for about 4 hours. This brining technique will produce a crispier skin while preserving moisture in the chicken during grilling. Put the chicken on indirect heat in a charcoal smoker and cook low and slow for about one hour, adding wood chips as necessary for flavor. I use pecan wood. While that is cooking, make the sauce. Heat oil in a deep sauce pan and add garlic and onions until they soften.  Add Chipotle pepper and heat for 20 seconds before stirring in the remaining ingredients.  Cook on low heat for 20 minutes until thickened.  When cool, strain out onion and garlic “chunks” if desired. After smoking for about an hour, move chicken to direct heat, cover generously on both sides with barbecue sauce. Cook for about 10-15 minutes turning constantly to char, basting with more sauce. Be careful as the sugar will burn, so move pieces as flare-ups occur. Serve with additional heated barbecue sauce on the side.

Turkey always seems better when cooked outdoors!  At least that’s how we see it here at BarbecueTricks.com and GrateTV.com. 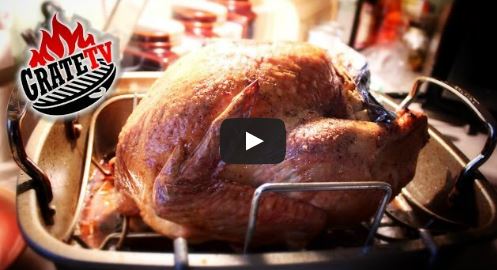 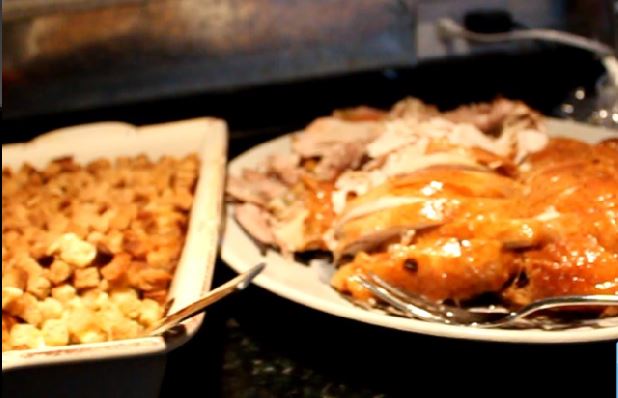 We decided to give you a super fast rundown of our favorite ways to BBQ Turkey.  From slow smoke to fast fry and rotisserie turkey too.  Take a look and plan your Turkey day to be the best ever.

Watch Top 6 Turkey Here or Below:

Three quick tricks for London Broil and tenderizing beef. Step through the process of preparing this easy and fantastic grilled feast.
London Broil Can be a tough cut of beef.  Here are three simple tricks to maximize tenderness in the beef for your next barbecue with friends.  It always starts with a nice clean looking London Broil.  This method and recipe below also works great with a flank steak or skirt steak for Fajitas.

First use that hammer thingy you’ve seen around kitchens for years.  The good old fashioned way to beat the raw beef into “submission.”   You’re almost pre-chewing it… but in the end your BBQ will still look pristine.   The thicker the cut the more you can

hammer it.  Another trick  I show in the video is to wrap the slab in plastic to avoid shirt staining splattering.

Secondly, use a nice marinade to soften the newly damaged fibers.    Some grillers may choose to use a high acid marinate to boost the tenderizing effects.

Tip/Trick 3 Go Against The Grain

Third, let the cooked meat rests for ten minutes or so (it’s pretty important but usually people get in too much of a hurry).  Carve your London Broil AGAINST the grain of the meat fibers or perpendicular to the strands of beef in pencil thin slices.     It’s another level of  jaw grinding your guests don’t have to deal with and the presentation is awesome.
The Not So Secret marinade here relies on a dose of smoke but it’s super easy. 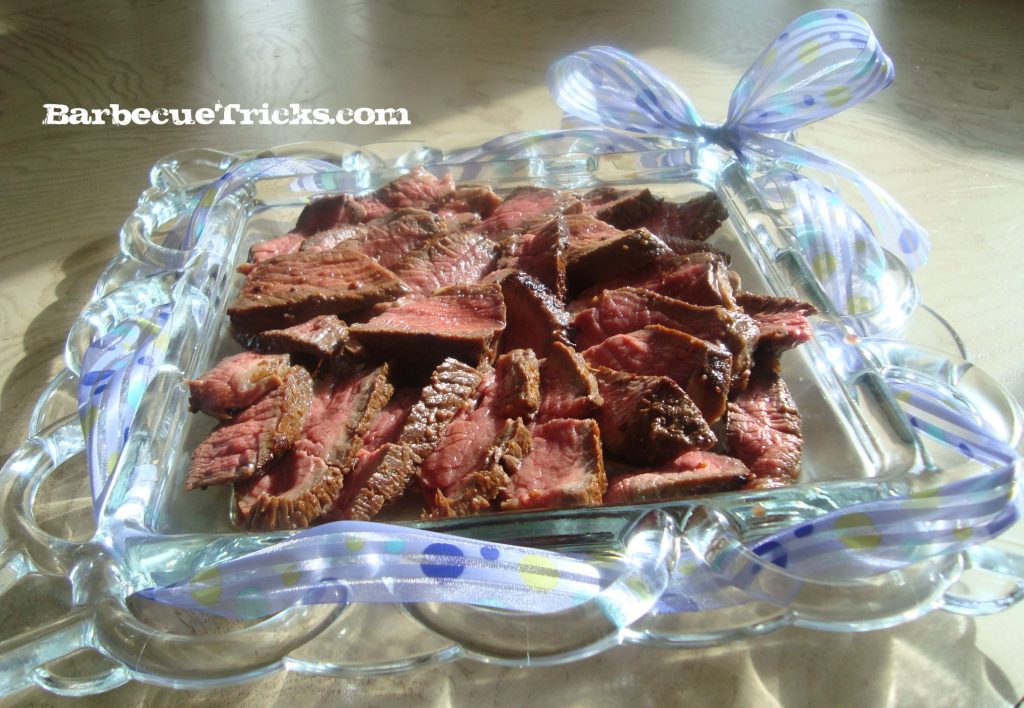 Click to Play
From http://gratetv.com The guys read a very lengthy letter from the mailbag and then show a use for that meat mallet in your kitchen cabinet. ;Watch for this week’s powerful secret ingredient that is used in almost everything. Hosted by three time SC State BBQ Champion Jack Waiboer and Bill West the founder of http://bbq.backstage.gq. 12/28/2010.
Tags: bbq, barbecue, barbeque, chicken, billwestbs, onion, shallot

Click to Play
From http://GrateTV.com Whatsthishere Sauce Recipe – Jack and West rundown a sweet and hot BBQ Sauce that is a hit with pork, chicken and beef. But one ingredient may leave you wondering “What’s this here…” 111210

Heat the oil in a deep sauce pan and add garlic and onions until they soften.  Add all peppers and heat for 20 seconds before stirring in the remaining ingredients.  Cook on low heat for 20 minutes until thickened.  When cool, strain out onion and garlic “chunks” if desired.

In this epsiode, Three time SC BBQ Champ Jack Waiboer answers a viewer email about everything from pork shoulder to pork butt. Bill provides you with the website of the week that will teach you how to unwrap your passion for bacon and maybe make an awesome trashcan smoker and the secret ingredient of the week is one of those ancient Chinese secrets.

Grate TV is released weekly at http://GrateTV.com and here at the GrateTV iTunes page.

You can also get notified via email of all new episodes here.

Just wrapped another episode of BBQ’s favorite Podcast. The smokin’ episode is titled: Rollin’ with Rotisserie, Slicing Brisket and a Tearfull Secret Ingredient. Click through to the video or head over to iTunes and subscribe to the feed.

What happens when good barbecue goes bad?  It’s one of the topics covered during this week’s BBQ video Podcast. Plus there’s a secret ingredient that’s used in most red barbeque sauces and it’s manufacturer is changing the recipe!   Find out what it is as well as an enlightening gadget for the grill. This is episode 8 of the weekly video podcast formerly known as MeatheadsTV. Jack Waiboer and Bill West talk barbecue and unveil a weekly secret ingredient.

From http://MeatheadsTV.com Episode 004 with Jack Waiboer and Bill West discussing barbecue questions about how to prepare for a first barbecue competition and fishy secret ingredient and a Beer Can Chicken gadget.

We’ve teamed up with the best cooker we know… three time SC State Champion Jack Waiboer to get together an BS about barbecue, beer, meat and cookin’ once a week.   Jack’s also the founder of Carolina Pitmaster’s Cooking School.  Hopefully it’s fun for BBQ fans and you can learn a bit from the beer we share together.

Episodes will post Wednesdays and we’re always up for show suggestions and questions.  But hey – it’s our first time… be gentle!    Post them here as comments and make sure you FAN us on Facebook and subscribe via iTunes.

Here’s quick sample… head to MeatheadsTV.com or iTunes for more!