This week’s GrateTV.com show looks at at unique pepper core remover and answers a question about a steamship round of beef.

Learn more about the show at http://GrateTV.com 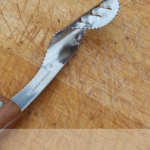 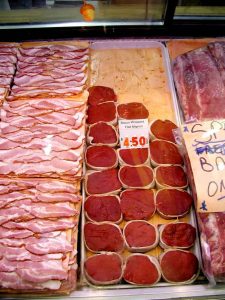 Filet Mignon (or fillet steak as it is called in English) is the most tender part of the beef animal and so requires some attention when it comes to cooking otherwise you can easily end up with a dry piece of meat and / or something that isn’t as tender as it should be.

It’s tender because the filet mignon is from the beef tenderloin, a little used muscle at the rear of the rib cage and it’s the fact that it is never put under great exertion that it remains so tender. For the same reason it has extremely little fat (if any at all) marbled into it and this also contributes to the tenderness. This particular cut of meat is also renowned for its price (and in my opinion) its lack of flavor.

I accept that this latter point is open to debate but whatever your opinion I do believe that it makes the cooking process all the more important to ensure that the texture is maintained and that the flavor is delivered to the maximum. In addition, it must not dry out.

Many people like to grill their steak and I am no exception so I’m going to start with this as method no.1, yes it’s quick and easy to do but it’s also easy to get wrong. To get the maximum flavor it is so important that your grill plates are super hot because by doing this your steak will quickly crisp on the outside (adding flavor) and seal the juices in so keeping your steak moist. Flip it once and only once, don’t press down on it because this will squeeze out the juices and season it after the cooking and not before. If seasoned (salted) before it will toughen the steak and also the salt will protect the steak from the heat – not what we want. Two minutes for each side of the steak will be perfect.

Method number two is also an extremely popular grilled filet mignon recipe and that is to cook it wrapped in bacon but the great challenge with doing this is get the bacon crispy on the outside without overcooking the steak and drying out the meat.

Essentially you spit roast the whole tenderloin after having wrapped it in streaky bacon (secured with cocktail sticks). The spit roasting over high heat takes about 10 minutes to crisp up the bacon and gently cook the outer area of the tenderloin and then the meat is removed from the spit rod and allowed to cool.

Once cool, the cocktail sticks are removed from the bacon (the bacon stays in situ because it has crisped up nicely) and the part cooked tenderloin is sliced thickly to produce the filet mignon steaks already wrapped in crispy bacon.

It’s then simply a matter of following the recipe above in terms of cooking hot and fast giving each side of the steak about 2 minutes and no more. Season and serve.

Paul Yates is a keen barbecue enthusiast and has written many gas grill recipes fillet steak including this grilled filet mignon recipe with bearnaise sauce.

As part of the Foodbuzz Tastemaker Program, I received a sample of Simply Potatoes and was asked to create a recipe to share. A new twist on the old “steak and potatoes”, my Philly Steak & Potatoes dish is a hearty winner for the whole family! Try it and let me know what you think. Seasoned just right, the potato crust gives the dish that flair to take it over the top.

Grease a deep dish pie plate and set aside. Mix potatoes, flour, salt, black pepper, cayenne pepper, minced onion and egg until well blended. Press mixture on the bottom and up the sides of the dish. Brush with 2 Tbsp Olive oil and bake at 400° for 25 minutes until lightly browned.

Sauté onion and green pepper in 1 Tbsp Olive oil until blended. Stir in meat, Worcestershire sauce and garlic powder, and cook about 1-2 minutes. Spread Alfredo sauce over potato crust, and top with half the Provolone cheese. Add the beef and veggie mixture, and top with remaining Provolone cheese. Bake at 400° for 10-12 minutes until bubbly.

Beer In The Rear Turkey

Turkeyon a grill or smoker can be tricky.    It’s easy to get rubbery skin (and that can actually make some people mad).  There’s a lot of expectation on a Thanksgiving dinner especially with skin lovers.

Beer in the Rear Turkey is almost fool proof.  It’s quick and give you a crisp golden skin with a hint of smoke.

The first time I heard about the beer can trick was around 1999 when my morning radio hosts became enamored with a recipe they found called Beer Butt Chicken.  They thought it was so great (probably just liked that the word Butt was in a recipe) they wanted to bring a grill to the radio station and demo it in the parking lot.   I’ve grown to like it too.  So it’s fun to be able to super size the recipe.

This time the poor thing gets violated with not just a regular beer can but you use the big “Foster’s Lager” sized can of beer. You can find it in most grocery stores.   Reserve half and enjoy as you prep.  You’ve earned it. You’re going to want to punch some holes in the top of the can and put some spice rub in the can.  And then you get to the bird…where you clean off the bird really well and make sure you get all the different things out of the inside of the cavity of the bird.  They hide it in different areas… the neck, the gizzards…

Caution: It's harder to REMOVE the can...

With the bbq spice rub inside the can… the steam and the beer flavoring will actually steam through the turkey and infuse it with a really super flavor keeping the bird moist from the inside out. You’re not going to get much from the outside-in because the skin of a turkey is kind of like a wet suit.    Rub the spice under the skin (I call this getting to second base with the Turkey).  The skin is really pretty resilient and thick so you’re not going to damage anything.

Then you just insert the can upright inside the bird.     Carefully lower the turkey on top of the can making kind of a tripod of sorts.    If you need a little extra room on the grill you may want to remove the bottom grill grate and put the tripod on a small roasting pan actually on the floor of the grill directly on the burners of the gas grill.  You won’t  actually turn the burners on under the bird.   Set up for indirect grilling heat.  Temperature is going to be 325 to 375 (if you have a temperature gage on  your gas grill – use it this time).    You can usually get this temp/indirect by having one or two gas burners on and the other two off.

To get a lick of smoke use some wood chips in a smoker box on he lit burner or using a tin foil pouch.  Making a smoker pouch really easy.  Then and then just let it cook.

After about an hour – open it up turn the bird around let it cook for another hour or until it gets golden brown on both sides.   Use a meat thermometer in the thickest part of the thigh and cook until you hit at least 160 degrees.

You’ll  want to use gloves and be super careful removing that can.   The liquid is dangerously hot and the can is greasy! Let rest before carving.

In the video demo we used an 11.75 lbs turkeyand cooked for two and a half hours (150 minutes). Approximately 345 degrees Indirect heat.

“Discard” half of the beer.    Add 2 tablespoons Rub into remaining liquid in can.   Using a “churchkey” can opener add additional holes to top of can.  Insert upright under and inside turkey using legs as tripod support.  Grill over indirect heat 2 to 3 hours until temperature measures 160 degrees in the thickest part of the thigh.  Let rest  before carving serving.