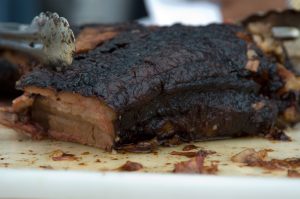 BBQ Beef Brisket worth the all day cook.

It was a wet Christmas Day but nothing would get in the way of an appointment I had with a 6.5 lbs. beef brisket set to feed family visiting for the holiday.

The key to brisket – I determined – is simply time.    Cook’s Illustrated (a favorite reference) writes about how to trick the process and only truly “smoke” the beef on a grill or smoker for a mere two hours and then finish off the brisket (wrapped in foil) for an additional number of hours at 300 degrees.   They say two hours is all you need to provide the smoke infusion.

We love a good BBQ trick or two but this day we kept to tradition. Low and slow over charcoal (we mixed hardwood lump and Kingsford Hickory 70/30) and used water soaked Jack Daniels Whiskey Barrel Oak Chips for smoke. (However Mesquite is a brisket favorite and a better choice).

The process began the night before the cooking by preparing a simple rub and rubbing down the brisket.   Feel free to trim down the fat cap.  There’s no need for more that about a quarter of an inch of a layer of fat.   But you do want some.     We opted to rub the seasoning on/in the fat too.   Then in the refrigerator ’til morning.

Brisket has a “flat” side and a “point.”    The flat looks similar to a flank steak with a long grain.  The point is on top of the flat with a later of fat in between.   The grain runs in a different direction on the point (something to remember when slicing).  We used what would be considered a small  6.5 lbs brisket that was mainly “flat.”     Typical of what you would find in a major supermarket but not mega cookout sized (you can find the biggies -8 pounds and bigger – at Sam’s, Walmart’s, or a butcher).

You don’t want to open the lid of the smoker more than you have to at this point.  Adding chips in the small side door is fine.   Some say every time you now lift the lid you’ll have to add 15 minutes to your cook time.   We added wet wood chips to the coals through the side door every 40 minutes or so until 11:30am.

At 11:30 we raised the smoker off the bottom and added some additional charcoal (1 chimney already hot / white ash) and wood chips, plus added water to the drip pan.

Smoker Temperature should stay between 225 and 275.   The Brinkman smoker has a reading of “Ideal” and I tried to stay at that level until about 1:50pm.  Then CAREFULLY wrap the brisket in foil.    Seal it as much as you can to retain drippings and return to the smoker for two to four hours until the brisket reached an internal temperature of about 207 degrees.  The thermometer will slide right in with very little resistance.   207 degrees sounds crazy to some that find a rare steak (130 degrees) the most tender… but there’s different chemistry happening.    The tissues in the tough brisket (collagen) only begin to melt at around 180 degrees.  You’ll just want to watch that the meat doesn’t dry out (keep it wrapped) and that the smoker isn’t too hot.

We pulled our brisket off at about 4:30pm with a reading of 206 and let it rest in a  cooler wrapped in paper bags (new trash compactor bags work well) until a half hour before time to serve.  The internal temperature will still rise when resting.   Give yourself plenty of time in the planning – we used all eight and a half hours (including an hour to let the meat rest before cutting).

Remember to carve against the grain into pencil thick ( quarter inch) slices if possible.  Our results were so tender we had to cut a bit thicker.    Electric slicers come in handy here.

Total cook time – about nine hours.   Process starts the night before.  Our experiment was with 6.5 pond brisket.